When you are looking for a portable or flexible option for your gaming, our expansive selection of card games will help you relax and pass the time, all while being affordable and easy to transport. 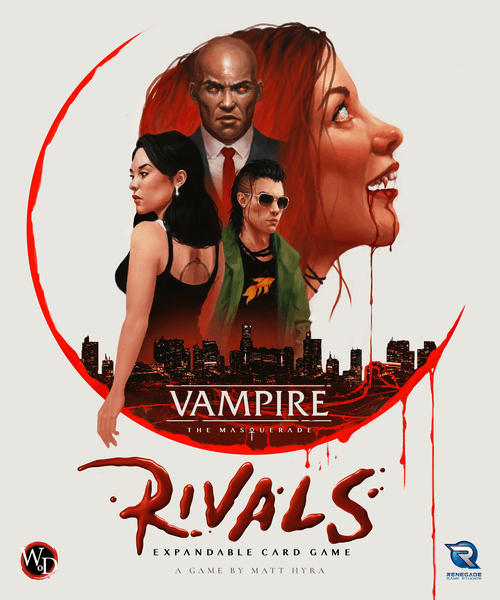 Game of the week

Vampire: The Masquerade Rivals Expandable Card Game puts you in control of a coterie of vampires who vie for control of the city of San Francisco. Through dominating mortals, using their political influence, and clashing with their rivals in the streets in the dark of the night, you'll gather your allies and face off against one or more other players as you seek to push your agenda.

Shop All of Our Collectible Card Games Inventory

When you are looking for a portable or flexible option for your gaming, our expansive selection of card games will help you relax and pass the time, all while being affordable and easy to transport. We feature many different types of card games;

Here are a couple of examples of each of the genres listed above. These games below are some of our best selling games in each category, but we carry hundreds of different games ranging from simplistic and whimsical to thought-provoking and strategic. Also remember that many of these games are available to demo in our Private Game Room.

Many of the people who buy the product do not play the game, choosing instead to collect their favorite characters from the franchise the game is based upon.

The object of the game is to play your Pokémon cards, that represent different creatures, to battle against each other. The first player to “knock out” (defeat) six opposing Pokémon wins the game.

You play the game with a deck of sixty cards that represent your Pokémon, as well as Trainer cards and Energy cards. Trainer cards affect the game, players or Pokémon in different ways, most of them temporary, while Energy cards act as the resources in the game.

In A Game of Thrones: The Living Card Game, the warring factions of Westeros await your command, inviting you to engage in a life-or-death struggle. In every game, you select devious plots and challenge your opponents on the field of battle, through back alley intrigue, and in the political arena.

Whether you play an against a single opponent, in a game known as a joust, or engage in a battle of three or more players, called a melee, winning challenges against your opponents is the way to victory.

Your ultimate goal in A Game of Thrones: The Card Game is to gain influence over the greatest seat of power in Westeros: the Iron Throne! To achieve this goal, you must call upon iconic characters, such as Tywin Lannister, Robb Stark, Stannis Baratheon, Daenerys Targaryen, Euron Crow’s Eye, The Red Viper, and dozens of others. You must maneuver the members of your House and your allies in a constant battle to gain power. The first player to claim fifteen power wins.

Dominion is widely considered the first mainstream Deck-Building Card Game. Each player starts with an identical, very small deck of cards. In the center of the table is a selection of other cards the players can “buy” as they can afford them.

Through their selection of cards to buy, and how they play their hands as they draw them, the players construct their deck on the fly, striving for the most efficient path to the precious victory points by game end.

Each game of Dominion can be customized by changing the cards available for purchase. Each game the players will select ten different items that can be bought this game, and the rest are left in the box. With over 25 different choices, the game has a very high level of both replay value and customization that is unprecedented.

Fluxx is a Standard card game in which the cards themselves determine the current rules of the game. By playing cards, you change numerous aspects of the game: how to draw cards, how to play cards, and even how to win.

At the start of the game, each player holds three cards and on a turn a player draws one card, then plays one card. By playing cards, you can put new rules into play that change numerous aspects of the game:

How many cards to draw or play, how many cards you can hold in hand or keep on the table in front of you, and (most importantly) how to win the game. There are many editions, themed siblings, and promo cards available.